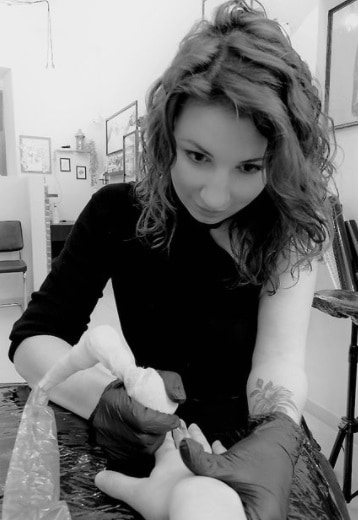 Getting a tattoo is a rush. It can be a very exciting thing to get a tattoo, and often as soon as you have gotten one, you instantly start planning your next one. With this excitement, you may be wondering how tattoo artists resist the urge to constantly be under that buzzing needle, especially if they have the ability to tattoo whenever they want, but can tattoo artists tattoo themselves?

Tattoo artists can tattoo themselves; however, they will usually only do this at the beginning of their career and not once they are established. This is because they use their own skin as practice while they are still learning the skill as an apprentice and later do not need the practice.

Even though they may not need the practice once a tattoo artist is established in their career, are there other reasons they may tattoo themselves? Do tattoo artists still do their own tattoos so that they do not have to pay someone else to do them? Let us have a better look at tattoo artists tattooing themselves.

Do Tattoo Artists Do Their Own Tattoos?

Usually, tattoo artists will not do their own tattoos and will instead find another skilled artist that they trust to do their tattoos for them.

Not only is it impractical for a tattoo artist to try and tattoo themselves since they will not be able to get close enough to the skin they would be working with, but they would also not be able to tattoo anywhere other than their legs.

It is also completely impractical for an artist to attempt to do a tattoo on their own body due to the fact that if they were to do their own tattoos, they would be tattooing almost everything upside-down from their angle.

Tattoo artists may work on themselves after being established in their careers, but they do not often do this.

At the beginning of a tattoo artist’s career, while they are still learning as an apprentice, and if their teacher finally gives them a chance to tattoo real skin, it is not very likely to have many volunteers waiting to be an artist’s first-ever tattoo.

This means that more times than not, tattoo artists will tattoo themselves as their first-ever tattoo on real skin – and they may even practice on themselves a few more times after that before moving on to a friend or family member.

Later on down the line in their career, though, as was previously mentioned, it is not very often that a tattoo artist will tattoo themselves anymore. Instead, they will use a skilled friend or a colleague to help them get whatever tattoo it is they that they are wanting, as you will generally get a better result from someone else tattooing you than you tattooing yourself.

You will get better results from someone else tattooing you because they will be able to get far closer to the skin, look at it from a better angle, and not be tattooing upside-down.

Do Tattoo Artists Ever Practice On Themselves?

As we discussed previously, tattoo artists who are new to the game will very often practice on themselves; this is normal as everyone needs the practice when they are at the beginning of their career, no matter what your occupation is.

This is not to say that an established artist will not ever tattoo themselves, though, as there are definitely reasons why an accomplished tattoo artist may still feel the need to practice on themselves. Let us look at just a few reasons why this may happen.

Because of this, tattoo artists may choose to tattoo themselves first to get a feel for this new tattooing style and build the confidence to offer this style of tattooing to paying clients.

Even if it is not merely to practice, tattoo artists do enjoy what they do, and they may want to get the chance to tattoo in a new style that looks like a lot of fun to them, and if they do not have a volunteer, they may end up just tattooing themselves so that they can try it out.

To Practice A Style They Feel They Need To Improve On

There may be a specific style of tattooing that an artist is aware they lack the skill in. They may sketch it out and practice it on orange peels and fake skin books, but when it comes time to now practice on real skin, they may choose to tattoo themselves once again to make sure their skill is good, and they are not putting a lousy tattoo on someone for life.

Many tattoo artists have done this and still continue to do this, as practice makes perfect, and there are not many ways for a tattoo artist to practice other than eventually putting a needle to the skin.

Do Tattoo Artists Ever Accidentally Tattoo Themselves While Tattooing A Client?

Unfortunately, tattoo artists have accidentally tattooed themselves with a dirty needle that they were using on a client before.

This has by no means happened to every tattoo artist and most likely has not happened more than once to the artists who were unfortunate enough to have had this happen to them, but it definitely has happened many times.

While working with your tattoo gun, there are many things that could happen to lead to this unfortunate mistake.

Some tattoo artists have spoken about how their gun slipped while tattooing a client, and the needle went right through their glove, poking their own skin.

Some artists had the tattoo gun’s cable hook on something, and as they tried to move, the gun was pulled from their hands, and they were accidentally poked with the needle before taking their foot off of the peddle.

Whatever the unintentional situation that may lead to this, unfortunately, many tattoo artists have been in this very scary situation before.

Thankfully, most tattoo artists have managed to never be in this situation.

It is more likely a “freak accident” to be poked with your tattoo gun while tattooing a client than a frequent occurrence, which means that most tattoo artists will go their entire career without this being an issue to them. Thank goodness for that because the medical tests that one would need to go through after being poked by a dirty needle are not fun at all.

Even though tattooing yourself as a tattoo artist is usually a move saved for rookies at the beginning of their careers, there are still tattoo artists out there who are well established and still choose to tattoo themselves.

There are many reasons they may do this; however, as we discussed, it is not a regular day to day thing that occurs, or even something that happens very often, as tattoo artists who are confident in their skills will very rarely feel the need to practice on their own skin.

If you are an aspiring tattoo artist and are hoping to get some practice in on your own skin, do not do this until your teacher gives you the go-ahead – as this could be dangerous, and depending on where you live, it may even be illegal. So wait until the professionals give you the green light, and then follow their lead. 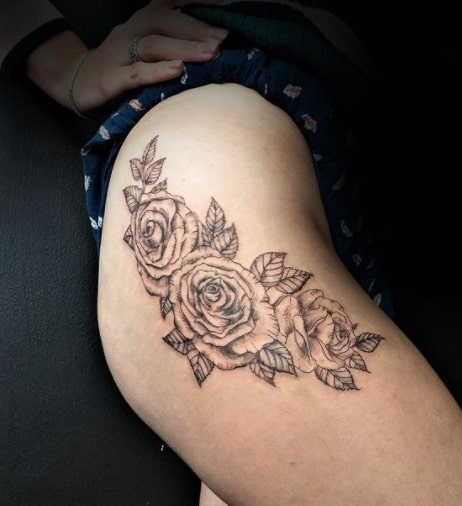 When getting a tattoo, there are many concerns that may surround your decision on where on your body you should get it. These concerns may… 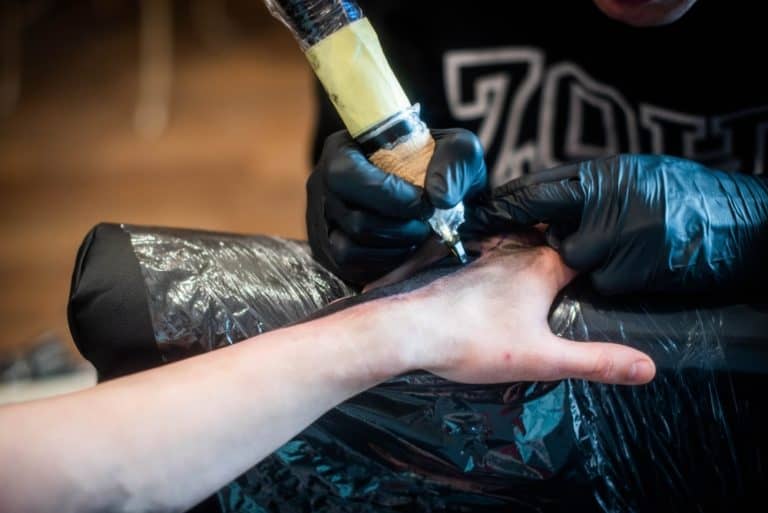 White ink tattoos look raised because the skin makes scar tissue when it heals, and it looks more pronounced because the ink is very light…. 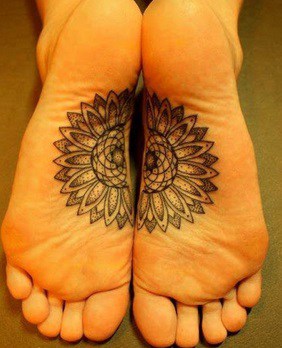 People often want a tattoo somewhere hidden. This choice could be due to a few different reasons, such as their career or simply wanting a… 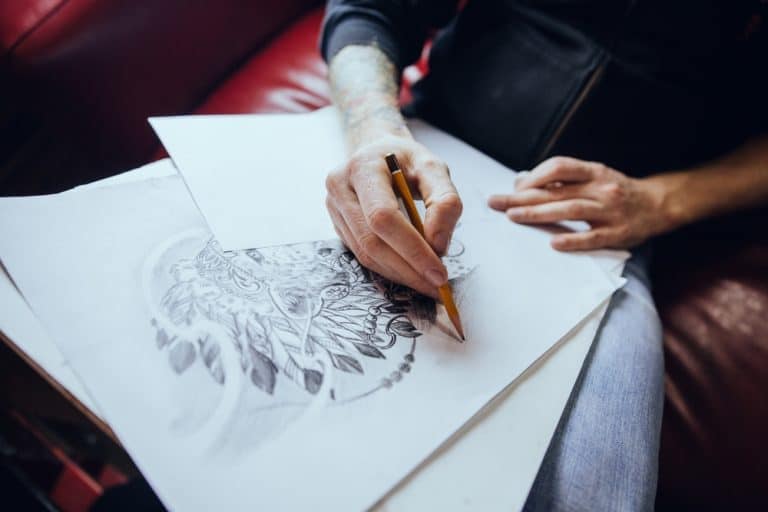 Getting a new tattoo is exciting, especially if you are getting a design that has a unique meaning or significance to you. Although there are… 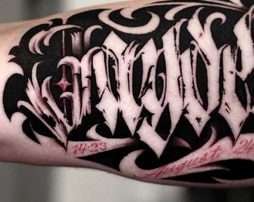 Although it may seem simple, tattoo lettering is a tough skill to master. Since not every tattoo artist has managed to get this skill right… 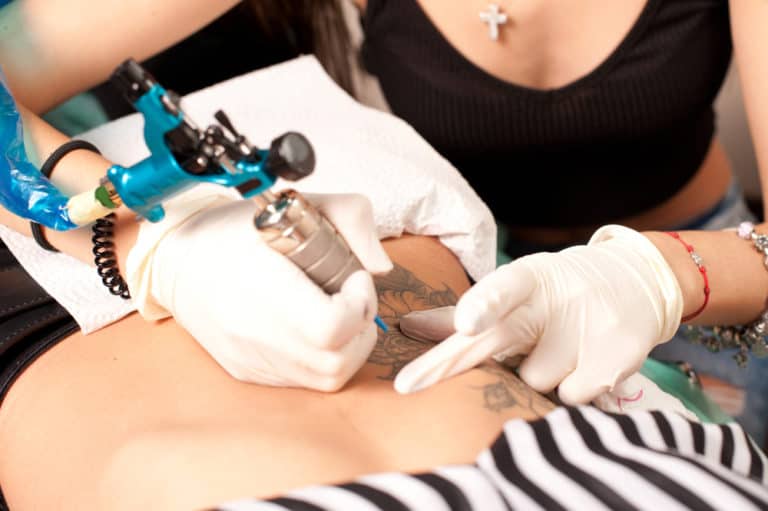 Tattoos have evolved; over the years, it has come a long way from just being used for ceremonial practices. Tattoos now tell a story and…